Home / The Envy CBD Blog/ Can Cancer Patients Look to CBD for Relief?
Previous  / Next

Can Cancer Patients Look to CBD for Relief? Unsurprisingly, cancer has a huge impact on those who get diagnosed, their friends and families, and society in general.  Over the course of anyone's lifetime, from birth to death, individuals run nearly a 40% chance of developing some form of cancer.  While the risk of developing cancer is expected to increase to 50% before 2030, the American Cancer Society claims we've also seen a steep decline of cancer-related deaths.

We look at new research, modern medicine, and advanced technology for saving those we love close - but what if there was more you could do for them?   Cancer is no easy burden to bear; and just treatment alone can exhaust someone, making it difficult to keep food down or have much of an appetite at all.

Today, we're going to look at the CBD oil benefits for cancer and symptoms of cancer to potentially improve quality of life, promote general wellness, easy major symptoms, and much more.

The climb towards allowing cancer patients to take advantage of CBD and other cannabinoid products is still an uphill battle.  According to the Food and Drug Administration (FDA), there are presently two cannabinoid-related drugs for those undergoing chemotherapy and other cancer-related illness.

The first is Nabilone, which is to an extent, synthetic THC.  This medication is used to treat severe nausea and vomiting induced by cancer drug treatment.  The drug works by introducing 5-hydroxytryptamine-3 (5-HT3) receptor antagonists to help prevent urges of nausea and vomiting.  While the drug is effective in reducing the vomiting aspect caused by chemotherapy, the drug remains ineffective in completely suppressing nausea; and the reasoning to this may lie in the fact that the effects of what THC should do to the body is made synthetically and therefore may include adverse side effects. 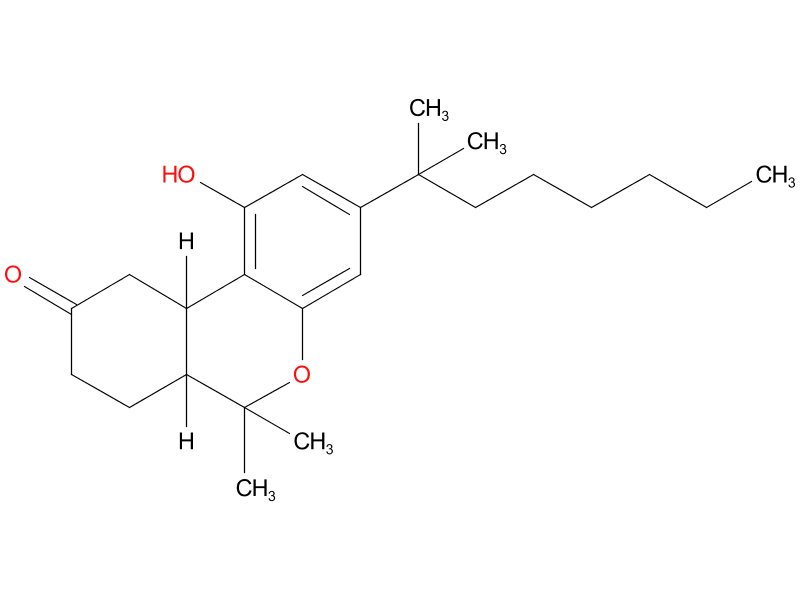 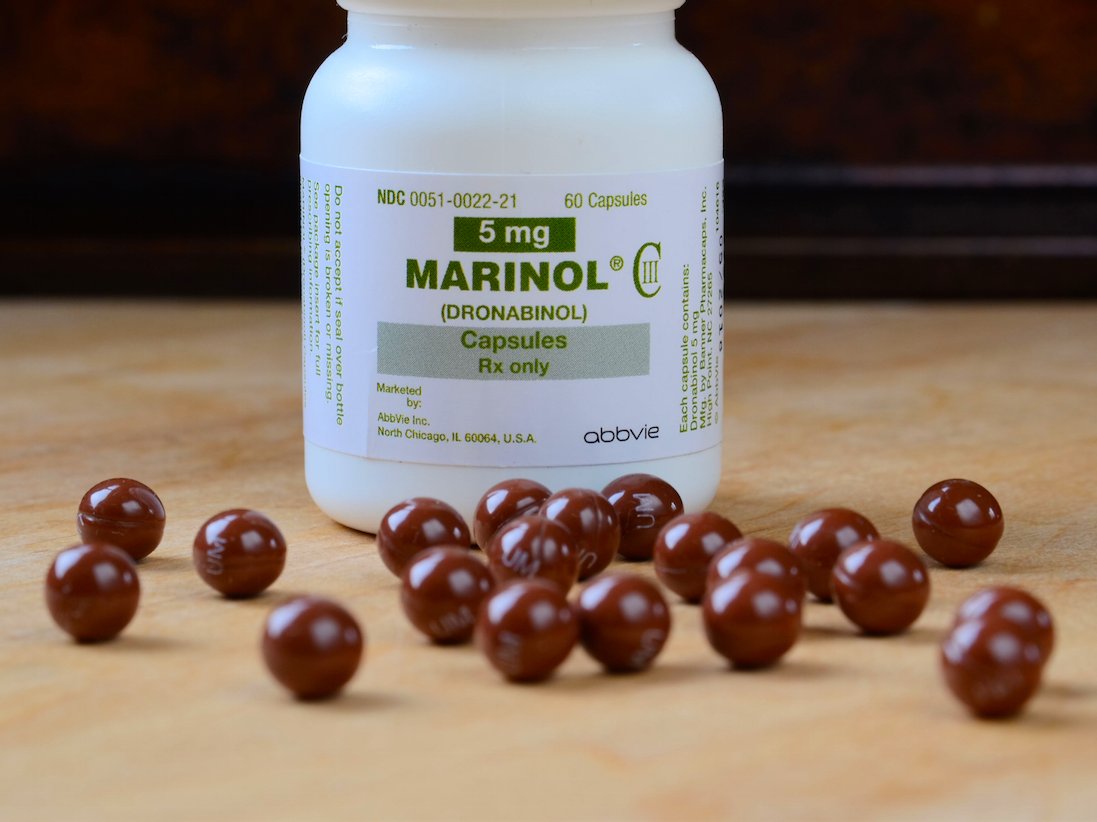 The second cannabinoid-related drug approved by the FDA is Marinol, a gelatin capsule containing THC.  Another side effect of chemotherapy is the loss of appetite and as a result, weight loss in patients; for which, the drug has shown effective change in stimulating appetite.  Like the results of Nabilone, Marinol is a synthetic THC supplement, resulting in its efficacy becoming extremely limited as the production of the drug often citing its own side effects for consuming.
It is worth noting that the U.S. government is currently conducting clinical trials for a third cannabinoid drug titled, Nabiximols.  While it has already been approved in Canada and parts of Europe, the FDA is still testing to see its efficacy.  The drug is derived under a whole-plant extract and contains an even ratio between THC and CBD to fully encompass the 'Full Spectrum' benefits countless others have seen firsthand and in a variety of brand, including that of our products.  The results have yet to be seen; but the goal here is to encourage wellness without its slew of adverse side effects that are all-too common with prescription drugs.

what can cbd do for cancer patients?

CBD, or cannabidiol, is chock-full of medicinal properties that experts are still discovering.  In fact, the efficacy behind the compound is so new that its uses are difficult to explain.  The typical consumer is bombarded by countless brands that are all promoting an over-arching message that CBD is great for fitness, wellness, beauty, mental health, ABC/123 - you name it.  The name of the game here, however, is the compound's effectiveness at treating or easing the symptoms of cancer; and the U.S. National Library of Medicine brings to light several studies that should otherwise prove this statement.

First, we look at how CBD could act as a potentially effective agent in cancer therapy thanks to its dual effect on both the endothelial and tumor cells.  By multiple mechanisms, the study reveals that CBD could inhibit angiogenesis which effectively inhibits cancer cells from replicating at the speed it normally does.  Thanks to the new spark of interest with CBD across the nation, we can now look at the efficacy of CBD in several types of cancer through different steps of the tumorigenesis.

In a separate clinical trial, experts conclude that CBD provides a broad variety of anti-carcinogenic effects.  While the THC in a cannabis plant is responsible for the psychoactive element that would otherwise limit its use in cancer therapy; CBD as a non-psychoactive alternative would be the ideal solution to the long-standing problem.  Studying CBD's impact on cancer cell invasion brings to light the compound's effectiveness at disrupting the growth of cervical cancer and lung cancer cells.  The CBD helps to reverse antagonists to both CB1 and CB2 receptors throughout the brain and body.  The findings, altogether, provides an effective mechanism that scientists can conclude that cannabidiol is effective as a therapeutic option for those being treated for highly-invasive cancers.

Pressing further throughout the latest in CBD research, results from a study on CBD's effects on neuroblastoma, or NBL, concludes that the compound demonstrates important anti-tumorigenetic action on the infected cells; again, by inhibiting its proliferation.

the science behind cbd's efficacy at inhibiting the spread of cancer

To get a better idea of how exactly CBD can interact with cancer cells to effectively inhibit its spread, the determining factor lies with the compound's relationship to GPR12.  GPR12 is a protein-coupled receptor that is involved in pathological conditions such as metastatic cancer.  Just as vital, GPR12 may also have a role in brain development and the maintenance of ooctye meiotic arrest.  The data in this study helps to conclude that GPR12 is a direct, novel molecular target for CBD; as it further strengthens the compound's effectiveness as an agent to block metastasis cancer proliferation. 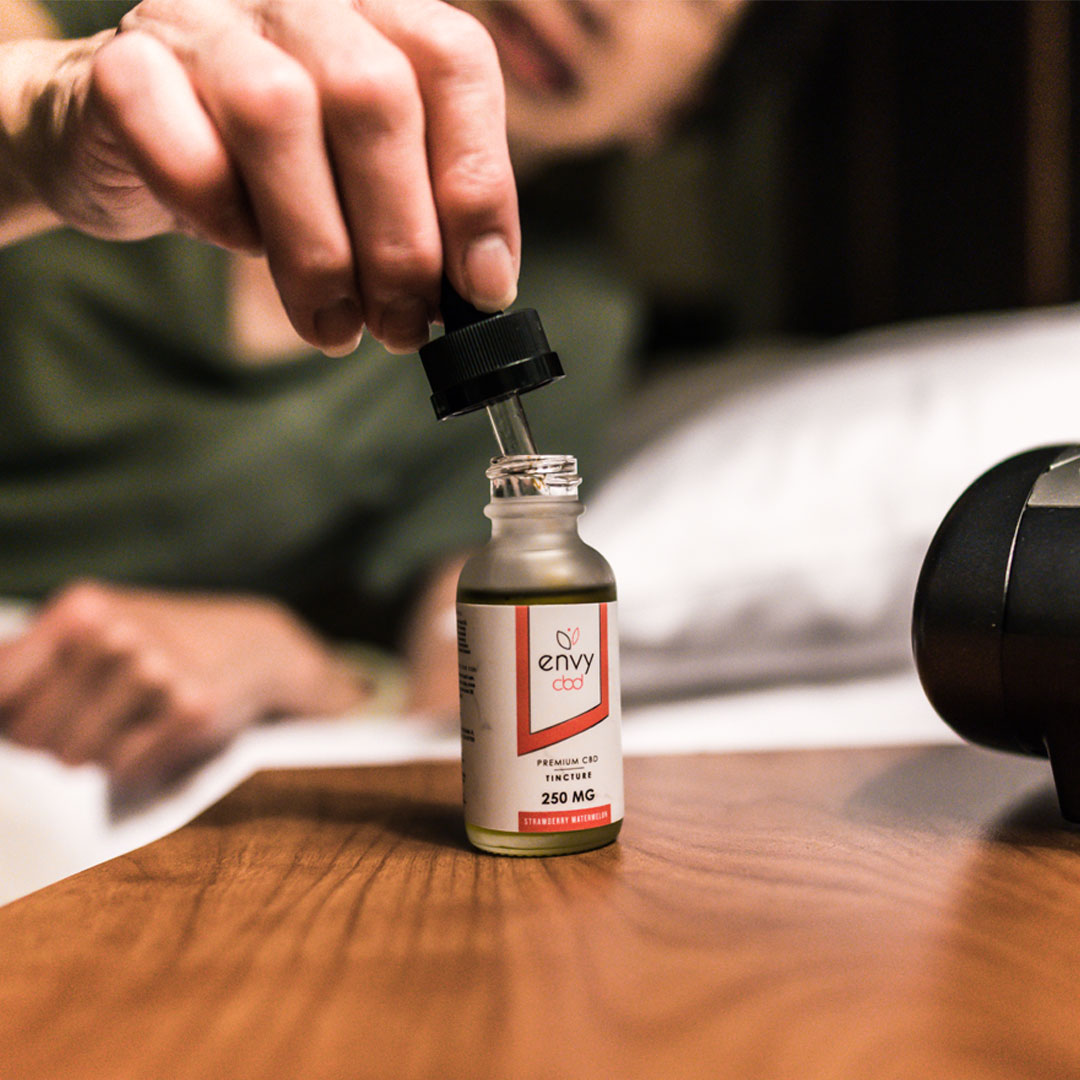 While research is limited on the subject, research is only limited in the sense that extensive research on THC-related medical marijuana is more abundant about cancer treatments.  CBD is a relatively new discovery compared to that of its psychoactive counterpart, and while it does not contain the same psychoactive elements, there is still a long way to go to push through its clinical trials.

CBD and the entourage effect's efficacy for cancer-related illness 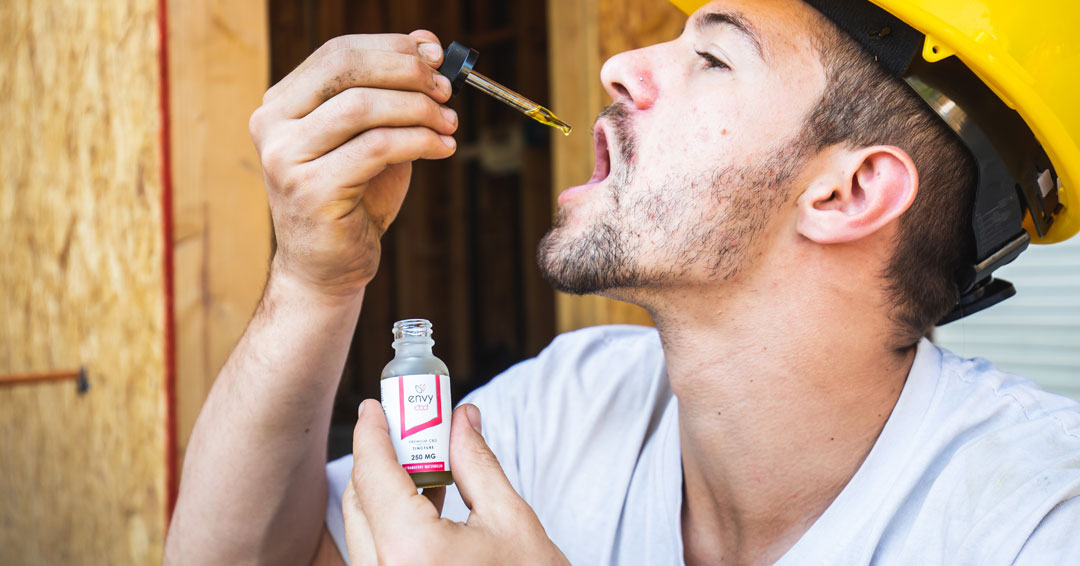 In the analysis for the effectiveness of cannabinoids in conjunction with cannabidiol as a weapon against cancer, we look at the process of apoptosis in cells.  Apoptosis is the main molecular mechanism by cannabinoids that would otherwise inhibit cancer cell proliferation.  Studies demonstrate that the process of apoptosis is a consequence of the induction of autophagy and endoplasmic reticulum stress.

In simpler terms, CBD and other cannabinoids help to prevent the spread of tumor cells by activating mitogenic factors that would otherwise suppress the immune system from doing its job.  This results in the real possibility that a Full Spectrum CBD could genuinely aid in a cancer treatment regimen.  While this study was conclude in 2016, it's helped to spark further interest in determining that there's an obvious need for exploring cannabinoids like CBD that are directly associated with molecular pathways to further enhance one's therapeutic experience during cancer treatment.

Glioblastoma is a type of fast-growing brain tumor.  Further research suggests that there may be an influence of cannabinoids  and other biomechanical  properties on tumor invasion.  Essentially, cannabinoids like CBD have anti-tumorous effects with underlying mechanisms that we still don't fully understand.  more research is certainly needed on this subject; but the data we can take away from this clinical trial is that CBD and other cannabinoids may be a potential therapeutic approach to these types of aggressive and invasive tumors.

using our endocannabinoid system to our advantage

The human body has its own Endocannabinoid System made of CB1 and CB2 receptors.  Under conditions of intense, but effective, pharmacotherapy, our CB receptors play a crucial role in a variety of other bodily functions including, but not limited to: 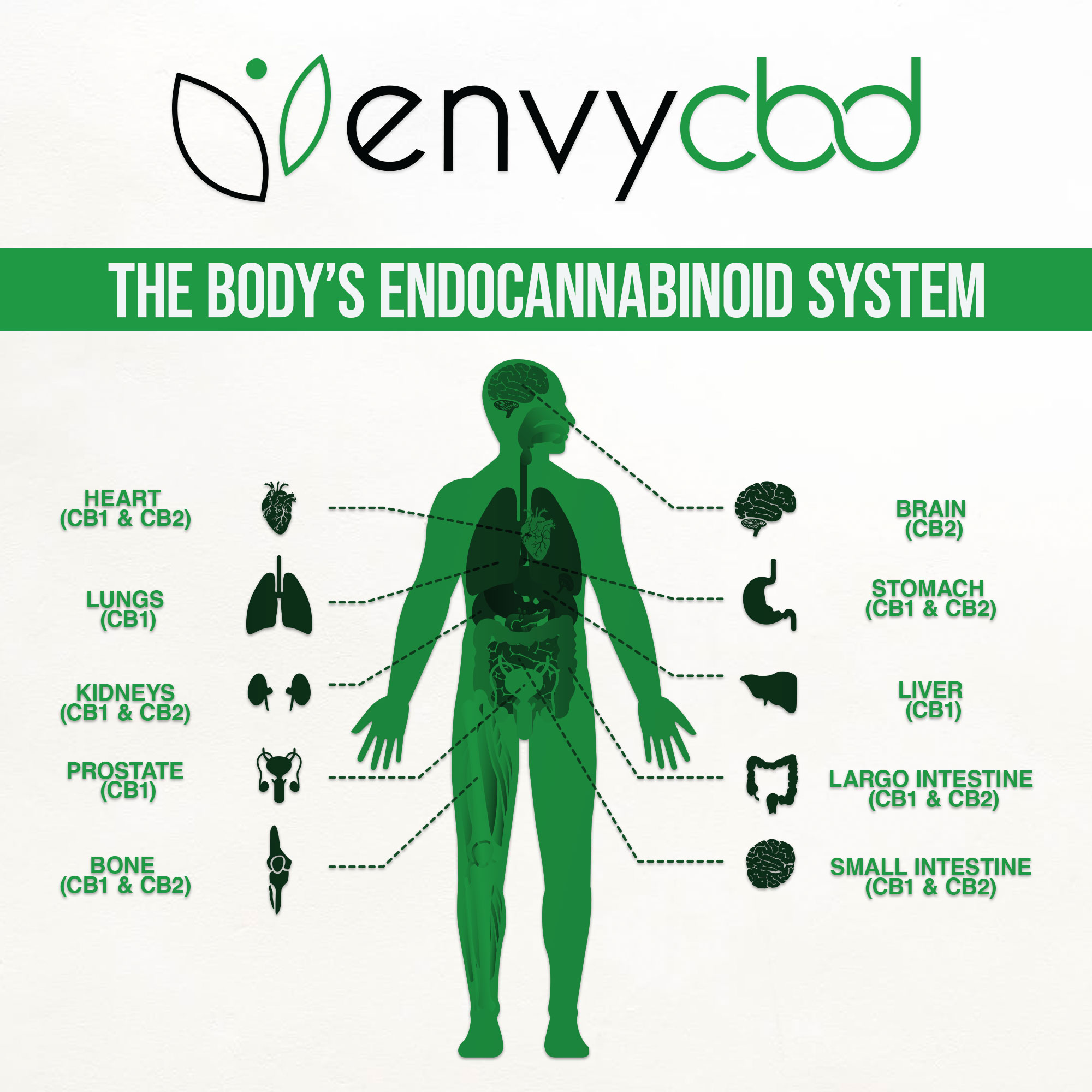 Understanding how essential the Endocannabinoid System's role in this variety of bodily functions, we look at the therapeutic targeting used in breast cancer.  In a 2006 clinical trial, results affirmed that HER2+ breast cancer could see a new prognostic tool and therapeutic target from interaction and stimulation of the cannabinoid CB2R receptors.

Essentially, rats experienced inhibited breast cancer tumor growth as a result of CBD.  This indicates that CBD may have the ability to potentially slow the progression of certain types of cancer.  Expanding beyond the first study performed on rats, a 2011 study published by Breast Cancer Research and Treatment suggests CBD's ability to control aggressive breast cancer cells.  While the study has yet to conduct human clinical trials, it reinforced the 2006 results that CBD inhibits aggressive breast cancer cells.

While we absolutely need more research on the subject, the sheer amount of learned information indicates there might be something between CBD and cancer; and whether the compound is used in tandem with chemotherapy or some other form of treatment, clinical trials indicate that patients can experience relief from some of their symptoms by allowing CBD to efficiently regulate their endocannabinoid system.

CBD is not a see-all, end-all, cure-all compound; but we look forward to seeing more research on CBD's potential to fight potentially life-threatening ailments throughout the body.  In the meantime, we're happy to help countless users across the nation to take advantage of CBD for its massive array of benefits and therapeutic uses.

Thank you for reading and be sure to Envy Yourself!